Prompted by the marvellous book by Arabella Boxer on English food between the wars (WWI and II) that my Dad gave me for Christmas, and a conversation with my Mum about how delicious old English dishes are, I’ve been seeing what the university library has to offer in the way of volumes on traditional cooking. It turns out that a mysterious organisation called the ‘Folk-Lore Society’, affiliated with, or based in, the Warburg Institute, possesses a number of such books. I called up ’Traditional Food in Yorkshire’ by Peter Brears, author of numerous titles concerning historic food, and it contains a detailed history of working class cooking and food production (wool workers; coal miners; farm workers and the urban poor) in the nineteenth century. It is primarily a (well-researched) history book, but does contain a number of recipes, too. 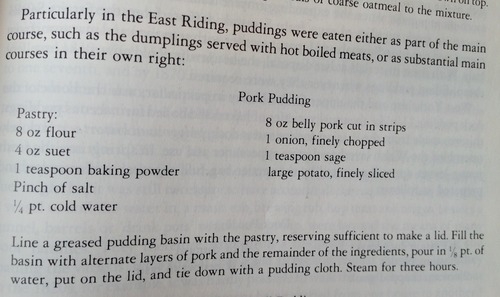 Either of these sounds appetising to me. Will report when I make one of them.