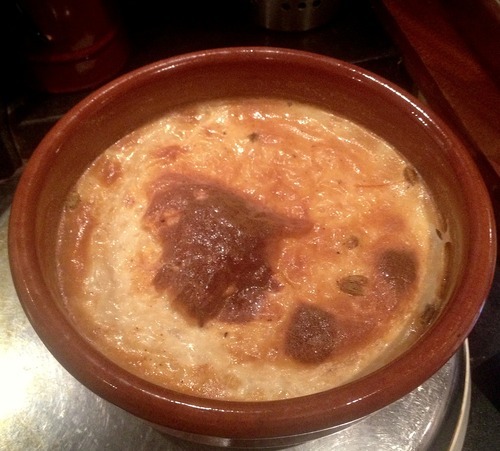 This is the easiest pudding that I know how to make, and is also among my favourites. I am pretty old school when it comes to the sweet dishes, and err on the side of seasonal fruits, steamed sponges, or those involving milk :  blackberry and apple crumble, bread and butter pudding, poached pears, trifle, rhubarb fool or summer pudding, for example.

Rice pudding, often associated in the UK with school dinners, or the tinned Ambrosia branded version, is a dish that has a life in every corner of the globe. At primary school it was served with a blob of tooth-achingly red jam with negligible fruit content, which I hated (though I fussily disliked most milky dishes then anyway).

Since making this slow baked version in one of the loveliest kitchens I’ve had the honour of cooking in, while living in Brixton with Zoe in three years ago, rice pudding is the sweet I produce most often, with varying flavourings. I’m fairly sure that the first one was for a get together of extended Brixton family to watch the World Cup Final, and it made a big impression on me.

You really can flavour this with almost anything that takes your fancy: cinnamon, nutmeg, rosewater, orange blossom water, cardamon, orange zest, saffron, pistachios, a combination of these, or none at all. The slow-bake gives it caramelised crust to the top and a certain drama to its presentation, as it emerges puffed-up and golden brown from the oven.

around 6 cardamom pods (or a cinnamon stick, etc.)

grating of nutmeg on top

Place all of the ingredients in a baking dish. Place dish in a oven on 180c for twenty minutes, then turn down to 150 and bake for 3 hours. Depending on your oven (fan/electric/aga etc) check on it every so often to see it hasn’t boiled over.

It may need slightly more or less time – the longer you leave it once the rice grains have cooked, the denser it will become as more milk evaporates. You can remove it as soon as the rice is cooked (check by trying a bit), or leave longer to reduce further and become more dense.

This followed a first course of pot-roasted guinea fowl (cooked by my mum, to succulent, moist perfection; with wet polenta flavoured with sage, lemon and a bit of parmesan, which I made). We ate the rice pudding with prunes that had soaked for a few hours in weak tea, to soften and plump them up. And on this occasion, with some sweet wine.