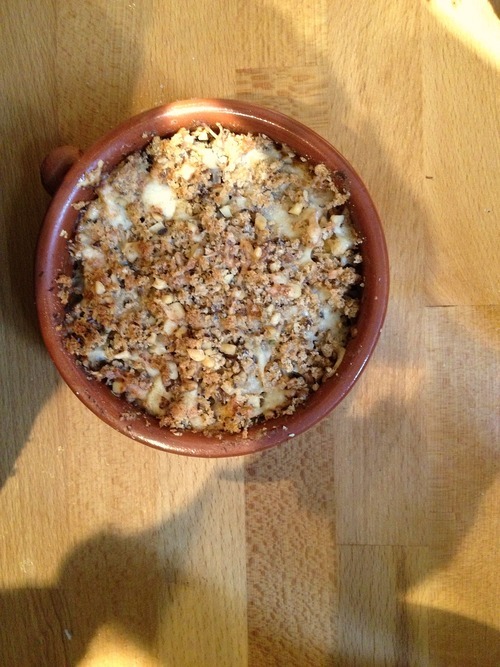 Swede is a vegetable that I had not eaten for years; until two weeks ago its flavour was a distant memory. I am fairly sure that Granny Johnson served it mashed up, orange and yellow, with carrots in Lavenham on a Sunday with some roasted meat. I can’t remember mum cooking it particularly – I know she doesn’t hold much affection for turnips and perhaps swede is similarly popular. Two weeks ago I went to a Ceilidh in Aldeburgh with lots of people who sail an 18ft Scottish keel boat called a ’Loch Long’, and ate it there with Haggis and mince, mashed potato and a mite of whisky poured over. The ‘Neeps’ were mashed too with their familiar partner (see above). I got an inkling of its taste, but really the sweetness of carrot and the rich, salty Haggis did much to muffle the root’s subtle charms.

Just before that weekend, my friend Brixton Blog founder Zoe entered us into a Swede cooking contest ’Redeem the Swede’ held in Herne Hill by the not-for-profit veg box company Local Greens and judged by the restaurant critic Jay Rayner. We pondered many possibilities : whole salt baked swede with a gruyère bèchamel to pour over; pickled swede salad; deep-fried breaded swede balls with a lemon mayonnaise; layered swede gratin etc. The challenge was to come up with something that foregrounded the swede as its main ingredient and flavour, but was not simply a side dish – it had to be substantial enough to stand alone. Further conditions were that it had to be easily transportable from Zoe’s house in Brixton to Herne Hill, in the rain.

After email correspondences with Zoe and a conversation with mum in the kitchen at home in Suffolk, where she reminisced about what they served at the landmark vegetarian restaurant Cranks in the 1970s, this was the idea we settled on. I thought the gruyère and walnuts of the crumble would make the dish sufficiently substantial, contribute texture and would compliment the swede’s flavour without overpowering it.

We did two versions of the dish: the first was in a very large quantity for friends on Saturday night before going out in Peckham, and there was a smaller portion for the competition, which was made slightly differently (I’ll explain this in the instructions). We did not win the competition – the winner made a venison stew with mashed swede on top – but I thought this really worked, and Zoe’s mum Tessa, who is a big fan of the vegetable said it was the most delicious swede dish she’d ever eaten – I’ll take that.

Zoe and I really liked this, and I will definitely be making it again. Oh yes, AND it’s high in vitamin C.

swede – as much as needed – for a medium dish about 1.5kg, peeled and cut into chunks

a dash of whole milk or single cream

a decent handful of walnuts, very finely chopped and lightly toasted in a pan (careful not to burn!)

enough breadcrumbs to cover the dish properly when mixed with the cheese and nuts, ours were from a brown loaf

Pre-heat the oven to 180 degrees Celsius. Boil the swede chunks in salted water until tender but not disintegrating. Drain. Mash well and then for a really smooth, luxuriant and lump-free texture (a common complaint about swede) force through a sieve with a wooden spoon. Having tried two variants of this (one with sieved swede, one un-sieved) the sieved version is definitely a higher class of dish, BUT the unsieved is good too if you can’t be bothered. Into the sieved swede mix a decent amount of butter, then a dash of milk and then a good grating of nutmeg, the sage and season very well with salt and a touch of pepper.

Taste this carefully and make sure you’re happy with the balance of flavour – add more nutmeg / butter etc if you feel it is needed.

Mix the breadcrumbs, gruyere and walnuts together. Spread over the mashed swede, ensuring good coverage. Dot the cubes of butter over the top.

Bake for 30-40 minutes, until the breadcrumbs are golden brown.

A green salad containing grated carrot, with an acidic dressing.