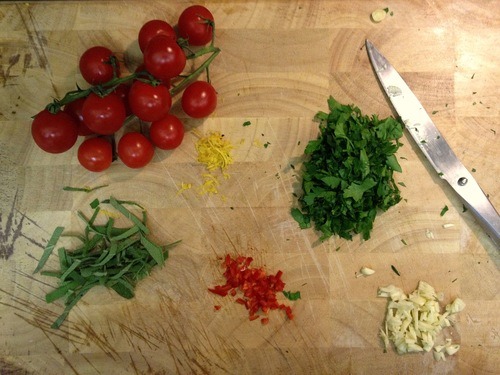 Pasta is something I’ve been meaning to cook for a while, but other dishes kept sidetracking me – for example, when I thought I would use some minced pork to make a spicy pasta sauce, it ended up being Szechuan Dandan noodles with smacked cucumber salad. But then some very ripe-looking tomatoes appeared at the grocer from France – clearly grown in a polytunnel using hydroponics as it was only April – *out of season alert* – but preaching isn’t my area.

I also picked up a lemon and some parsley. The breadcrumbs were from the freezer, left over from the creamed Swede with Gruyère and walnut crumble I made in February and there is no need to defrost them. If you can’t eat normal pasta, I hear spelt is the best alternative, and likewise for breadcrumbs, which you can make by whizzing up stale (spelt or rye) bread in a food processor. No-sauce pasta dishes like this are something that I have made often, but this one seemed to work particularly well, so I thought I’d record it. The herbs I used were sage and parsley, but oregano, basil, fresh thyme and marjoram would all also work nicely in whatever combination you like – the function is to add some fragrance and green woodiness to the dish.  The breadcrumbs add texture and richness, and prevent the whole thing from becoming a bit acidic.

a handful of breadcrumbs

Put on a large pan of well-salted boiling water for the pasta (idea ratio is 100g pasta: 1 liter water: 10g salt). Place 2 tablespoons of olive oil and garlic and chilli in a cold pan.Turn heat on and as oil heats up, the garlic will become aromatic, at that point, add the tomatoes and turn the heat right down to a very gentle level. Put pasta on to cook.

In another pan, gently fry the breadcrumbs in a few more tablespoons of olive oil until brown and be careful not to burn. When tomatoes have lost their edges a but, but are still whole, mix in other flavourings and season. Turn heat off. Drain pasta when cooked to al dente, reserving a small cup of cooking water.

Taste tomatoes for seasoning, and acidity – if necessary add more lemon juice or vinegar and more salt. Add another bit of olive oil to tomatoes and mix up with pasta and breadcrumbs with the reserved cooking water. Serve. If desired, add parmesan

A green salad and a glass of red wine.