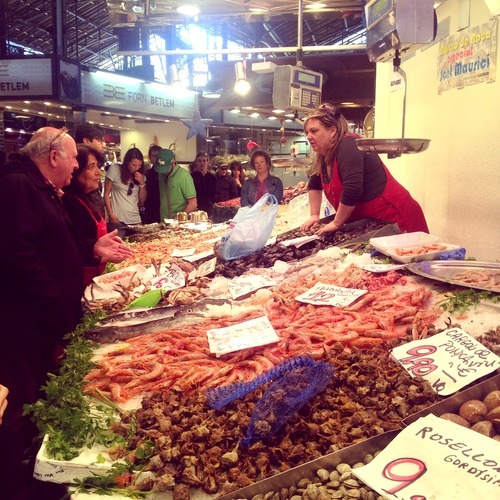 Until last week when I went for Primavera festival (Blur/Wu-Tang/Nick Cave/Knife etc) I had not visited Barcelona, and as well as the music, was looking forward to the food.

We ate a lot, and it was good: slices of Galician octopus with a dusting of paprika; soft fried Calamari with a featherweight batter; salty, scorched Padron peppers; gently cured cubes of cod with black olive tapenade and slow-roasted tomatoes, golden, crisp deep-fried potatoes with spicy mayonnaise – and more. And lots, and lots of wine.

One recommendation really delivered the goods: Anna Tobias, chef at Rochelle Canteen (where I had a truly divine rabbit for lunch just before setting off) told us about El Xampanyet. It is a narrow room decorated with blue patterned tiles, has very friendly, helpful bar staff and served us the best tapas of the trip. Their selection was refined and simple (the cured cod mentioned above, white asparagus etc). While playing endless rounds of gin rummy, Zoe and I sank a litre of their €9 sparkling wine at an alarming pace. They serve it in rather lovely old-fashioned bowl shaped “coupe” glasses.

All-round babe and Times writer Ruth told us about Bar Martin Villoro on the Passeig de Joan de Bobo near Barcelonette – it is a trad-style joint filled with banqueting locals alongside many newer, rip-offs on the busy road that leads to Barceloneta beach. We stopped there for a snack and intended to return for one of the pans of rice cooked in squid ink with shellfish that we saw others having for lunch, but did not quite get around to it: next time.

A more self-aware and chic venue that Zoe and I visited a number of times during the week was Bar Lobo. It is owned by the ‘Tragaluz’ group who have a stable of design-led hotels and restaurants and accordingly, Bar Lobo feels more branded than elsewhere, but we didn’t mind. Z loved the fresh carrot and orange juice (she declared it was the best she’d had); they served the lightest, freshest Calamari of the week, and I had a marvellous, deeply rich and meaty snack of sliced Catalan sausage on toast with Cep mushrooms. It’s popular for brunch, too. Apart from a few officious staff, it’s a fine, breezy alternative to more typical places.

Zoe and I shared an apartment, and made a feast of every breakfast. Each morning we prepared a plate of sliced tomatoes with Jamón Iberico and olive oil, boiled eggs, bread, and ripe, sliced peaches with almonds, yogurt and honey. One breakfast involved warm figs with honey and salty local cheese. I made a routine of visiting the café underneath the flat to order a black coffee.

The boys who were also going to Primavera (Chris, Leo, Richard and Ben), shared an apartment nearer the festival in ‘El Clot’, and in our habit from when we were housemates in London, Zoe and I decided to cook for everyone. For 7, a Paella seemed an appropriate dish – and we were also on a bit of a budget. As we were cooking in the boys’ holiday flat and there wasn’t an adequately-sized pan, I had to use two pans parallel to each other. If you don’t have a large enough pan for 7, this works fine, you just halve everything and add to each pan simultaneously. I was assisted in preparation by Zoe and Chris, and Richard did a good stint of stirring. Leo provided the post dinner liquor.

a double handful of green beans, chopped, or peas

around 750g unwashed, shortgrain rice (common varieties include: Bahia, Balilla, Bomba, Senia, and Calasparra but the supermarket will brand it as ‘Paella’ rice probably)

a pan containing 2 litres of water that has been brought to boiling point and which is till hot on a hob next to the one you are cooking on.

In a few tablespoons of olive oil, soften the onion and garlic and cook with the chorizo for a few minutes on a low-medium heat. Add the red pepper and soften for a few further minutes. Add the rice and stir well, coating in the oil. Listen to the rice crackle a bit for a minute or two. Add the saffron and wine and cook of the alcohol for a bit. Add the tomatoes and stir in. Stir in the frozen prawns and cook gently for a minute until defrosted.

Gradually add hot water by the ladle, only adding more when the last lot is absorbed by the rice, stirring constantly. When this is happening, the rice may develop a bit of a crust on the bottom – don’t worry – this is encouraged. When the rice is mostly cooked, but still a bit al-dente add the sliced beans or peas. Put a put on for a few minutes to cook the greens. Check and stir a minute in. Check that they are mostly cooked, and then season the paella really well with salt. Keep tasting until it is right. Finally, add the mussels on top and cover or place a lid on. Cook for a few minutes until all of the mussels have all opened, discard any that do not open.

Bread and wine. And a wedge of lemon if you wish.