My parents have a small boat and we spent two days on it sailing around the east coast last week, from Pin Mill on the River Orwell, out to sea past Felixstowe docks, along the coast and then up the River Deben to moor at Ramsholt and back again. When we were at Ramsholt we spoke to the man who watches over the moorings, George, about what we should pay him to spend the night on the mooring. He said five pounds. We said we didn’t have any cash but we could ask someone to drop some off. He said it didn’t matter. We offered to buy him a drink instead from the pub next to the river he said he didn’t drink or smoke and gestured to his face, which had had a major skin graft. He wore spectacles with a floral print on, navy blue trousers and navy sweater tucked into his trousers. He is one of the smallest men I have ever seen, and told us he has been working there for 60 years, 20 with his father, and 40 since his father died. He seemed very happy. It’s hard to imagine the job existing after George stops doing it.  I would place him well into his 80s. He said he was born near the church which we could see from where we stood “well before the war”.

On our first night on the boat I cooked this dish. Cooking in a very confined space with limited ingredients and equipment focuses the mind on flavour above all. Such limitations can provide a highly effective creative constraints if they are not also a tyranny. 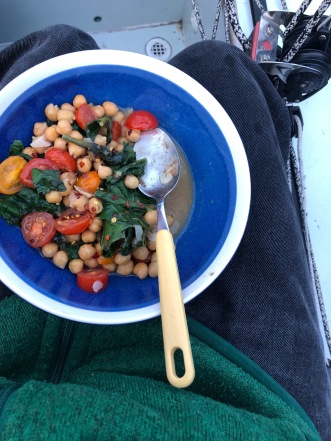 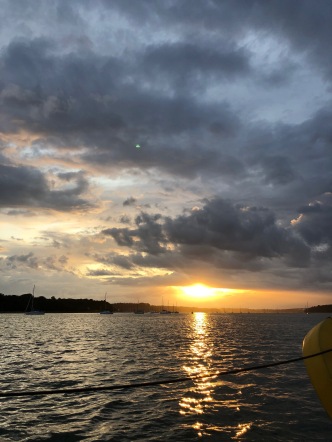 25g butter (a good slice from a block)

a handful of greens (we had chard, spinach would also be good – you could also use frozen)

a pinch of chilli flakes

Melt the anchovies slowly into the melted butter with the sliced garlic. Do this on a low heat. Use a wooden spoon to break up the anchovies. Add a pinch of chilli flakes if desired. Add in the tin of drained chickpeas and stir. Add in the tomatoes and greens and stir until the greens are wilted to your taste. Season with salt and pepper and eat.