I placed a small pan of water on to heat up and filled the kettle with water and turned it on. I ground the coffee (I need to adjust the grind, it is becoming like rubble, not fine sand). I cut four small tomatoes, two yellow two red in half, and one medium sized tomato into thick slices, removing the tough core with a small sharp knife with a green plastic handle. The kettle boiled and I began pouring hot water over the coffee (which on account of my bad grind, filtered through too quickly, making for weak coffee), and then sliced the bread for toast. In a small frying pan I melted a piece of unsalted butter and when it was frothing, lay the tomato slices into it and turned the heat down. I took the knife and with the point, pricked holes in the halved small tomatoes. I sprinkled a few thyme leaves from the yard over the tomatoes as they cooked. I swirled the almost-boiling water in the small pan in a clockwise motion, cracked an egg on the side, and gently dropped it into the whirlpool, then repeated this with a second egg, and put on the toast. I turned the thick slices of tomato over and let the other side fry for a moment. Then, seeing they were all soft, poured a dash of double cream into the tomatoes, shook the pan gently, and allowed it to bubble gently for a minute. I turned the heat off, seasoned the tomatoes with salt and pepper, buttered the toast, tipped the tomatoes in cream onto the toast, lifted the eggs from the water and tested how set they were by prodding them with my finger. They were too jelly-like, so I put them back and waited for 30 seconds or so. Then I removed the eggs and placed them on top of the tomatoes and added salt and pepper. I put the blue coffee pot, two wide-rimmed cups, two knives and forks and the food on the table. The kitchen faces east and the sunlight fell on the plates of food, making the colours suddenly brighter. 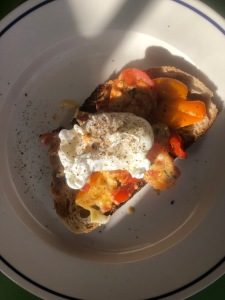