Though relatively elaborate for a lunch, this dish took 30 minutes to make (and 5 minutes to eat!) on a day when my partner only had a few minutes between Zoom meetings. I have a tendency to make quite decadent lunches on the fly when I get an idea in my head. On this occasion, it was the thought of sweet earthy celeriac and porcini in a silky sauce with rich hazelnuts and salty parmesan.

I have never cooked fresh porcini, which are expensive, highly seasonal and hard to find. Dried porcini are a good hack if you want to produce a rich, deep mushroom flavour but don’t have access to wild mushrooms or fresh porcini. They have a powerful musky earthy smell, and I store mine in an old jam jar. One packet lasts me ages as it doesn’t take much to make an impression. They are excellent in vegetarian and vegan stocks and stuffings, too. 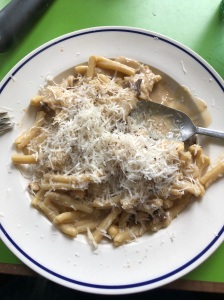 200g celeriac, tough skin cut off with a knife

a sprig of thyme, leaves removed

Remove the milk from the fridge.

Place a large pot of water onto boil – containing 1.5-2 litres. When it is boiling, add a tablespoon of fine salt.

Boil a cup of water in the kettle. Pour it over the dried porcini in a little bowl so they are just covered to rehydrate them. After 5 minutes lift out the porcini and roughly chop, and keep the fragrant soaking liquid to use in the sauce.

Roast the hazelnuts in a dry pan or in the oven, until the skin begins to come off and they are going golden (but not dark) brown. Remove from the pan and put in a dry clean tea towel and rub to remove the skins. Roughly chop them.

Slice the peeled celeriac the thickness of a pound coin using a knife or a mandoline.

Blanch the celeriac in the pan of boiling salted water for 2 minutes or until tender with a little bite.  Remove from the water using a sieve or a slotted spoon and set aside.

Put the pasta in the boiling water in the big pan (in which you blanched the celeriac) and set a timer.

In a medium sized sauce pan that will be able to accommodate the pasta later, add the knob of butter to melt on a low-medium heat. When it is melted add the flour and stir in. Watch it foam a little and stir it a round. Slowly add the milk, stirring all the time with a wooden spoon. When it’s all in, add the garlic, the thyme leaves, and a pinch of salt and a grind of black pepper and keep stirring on the heat as it thickens a little. Don’t worry too much if there are a few lumps, just keep stirring. Add a half cup of the porcini soaking water and keep stirring, allowing it to bubble a little but not furiously.

Add the chopped porcini to the sauce and stir, then add in the celeriac and stir, and the chopped hazelnuts and 2-3 tablespoons of finely grated parmesan. Turn off the heat. Taste for seasoning and add more salt if wanted. It should have the consistency of double cream, not really thick, but coating the wooden spoon.

Drain the pasta when cooked, reserving a little water in case the sauce needs letting down further. Add the pasta into the saucepan and stir/toss well. Serve immediately. Grate plenty of parmesan on top.

– If we had eaten this in the evening I would definitely have had it with red wine and a green salad on the side with a sharp mustard vinaigrette. The sauce could be ramped up by adding a tablespoon of creme fraiche or a few tablespoons of cream at the end of making the sauce for extra richness!