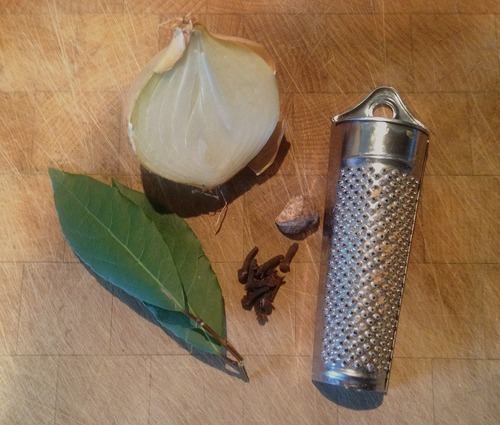 – what I used to infuse the milk for the sauce

This is a quietly elegant dish, and is my version of one that I first ate earlier this year when visiting my parents in Suffolk. My mother cooks vegetables in white sauce every now and again during the week, and at first its absolute plainness astonished me.

The self-restraint required not to embellish is considerable, given that practice of adding herbs, toasted nuts or various drizzles is an almost endemic culinary tick in contemporary (post-Ottolenghi) British kitchens. And, it is true that often a garnish can be so positively transformative as to become integral.

But this is not always the case, and this here is such an example – though admittedly, I had to resist a strong urge to add chopped toasted walnuts.

This was the last supper I cooked in London before I moved to Suffolk to finish my PhD. It was cooked on a Sunday evening at Chris and Ed’s house. I was ably aided and abetted by Chris, whose suggestion of steaming some of the vegetables was invaluable, and Ed happens to be one of my absolute favourite people to cook for, as he never fails to have at least two helpings (I recall a record of five), while maintaining an enviably slim frame.

5 – 6 baby leeks trimmed and cut in half OR 2 normal sized leeks cut into 1 inch rounds (well cleaned, which you do by making a cut from the green end of the leek to where it becomes green, lengthways and in the middle of the leek, and rising thoroughly under the tap)

First, infuse the milk with the onion stuck with cloves, the bay leaf and the nutmeg by adding to the milk, bringing just to the boil, then taking off the heat and leaving until needed. (This is an optional step)

Prepare your vegetables as indicated. Then, boil the potatoes in salted water until cooked (check by sticking a knife into the centre) and when cooked, place them in a dish to keep warm and dry out a bit in a warming oven – less than 100 degrees celsius.

Steam the remainder of your vegetables until just tender: we made a makeshift steamer with a colander over a pan of boiling water with a lid covering them. We cooked the carrots and the cauliflower first, and when they were ¾ done (after about 5-6 minutes) added the leeks, which take less time.

While they are steaming make the white sauce. Remove the onion and bay leaf from the milk. Melt the butter until foaming and then add the flour, cook through for a minute or so. Slowly add the milk, while whisking vigorously – don’t worry about lumps, you can whisk them out. Then stir or whisk over a higher heat until the sauce begins to thicken. When ready it should be the thickness of double cream. Add the cheese and stir. When it is melted, taste for seasoning and add more salt if necessary.

Lay all of the vegetables in a warmed serving dish. Pour over the sauce and serve.

A bottle of white, Puligny-Montrachet 2009.