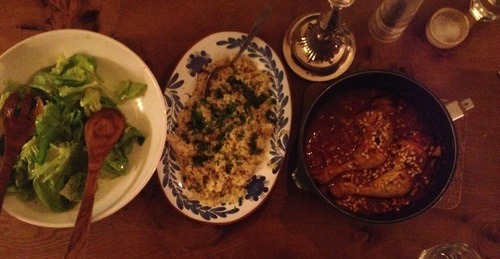 On Monday I almost made cauliflower in white sauce with chicken and braised peas – but roast beef with creamy dauphinois and magisterial steamed marmalade sponge and custard was Sunday’s feast – so I thought a contrastingly spiced dinner would be preferable.

I have made a similar dish before and posted it on here months ago, but this rendering is by far the best yet. My dad, who ate it, insisted I write it up and though he’s not known for being short of hyperbolic appraisals of his supper (especially when cooked by my mother), he’s nonetheless convincing. So here it is – I really enjoyed it too.

1 cup bulghur wheat, covered with water so that water is 1 inch above wheat in the pan, and cooked on a medium heat with a lid on until water has disappeared. Season with olive oil a pinch of salt and chopped parsley just before serving.

Season the chicken all over with salt and black pepper. Heat two tablespoons of olive oil in a heavy-bottomed pan that fits the chicken legs fairly snugly, and add the chicken skinside down.

Cook until the skin is browned and then turn over. Add the onions to the pan and cook until soft and translucent with a lid on. Add the garlic after 5 minutes of the onion cooking. Add the ginger, cinnamon, harissa paste, chilli flakes, saffron and tomato paste and fry for a minute. Add the water – enough to just cover the chicken.  Simmer for 15 minutes. Add the chopped tomatoes, vinegar and honey. Simmer gently for 20- 30 minutes so that the sauce reduces by half. Taste for seasoning and add salt until you are satisfied.

While it is cooking gently toast the nuts so they are just turning light brown.

To serve squeeze lemon juice over and sprinkle over the nuts.