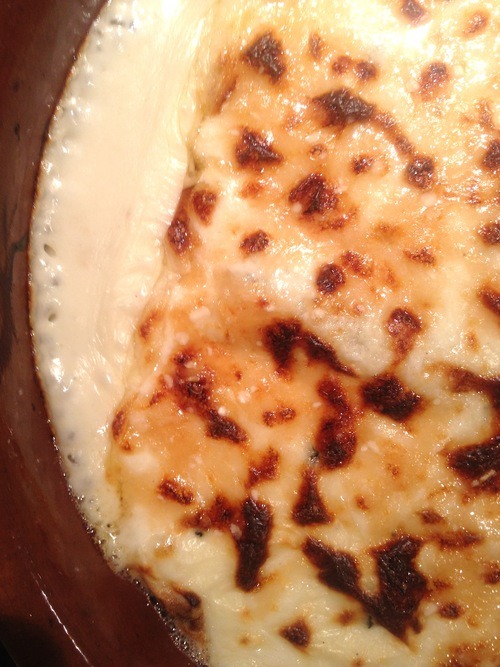 In 2012 my friend Katie gave me a little jar of sliced summer truffles in oil. I’ve rarely if ever eaten truffles and until Tuesday, I had not found occasion to use them. Fortunately this jar lasts until December 2014, so they were still in good shape when pancake day gave me an idea for a recipe.

The truffles gave the sauce a deep, earthy luxuriance. I did not overdo it though, which would be an easy mistake to make, such is their musky power.

You can buy jars of sliced black summer truffles in oil online for around £15.

a double handful of brown or white mushrooms, finely chopped up

1 tablespoon of dried ceps, rehydrated in just enough hot water to cover them for 30 minutes, then chopped

butter and a tablespoon of olive oil

1 egg and one yolk

Sift he flour into a bowl and make a well in the middle. Break in the egg and yolk, and add a pinch of salt and a splash of the milk. Whisk the egg, gradually incorporating the flour, to make a smooth cream. Whisk in the rest of the milk and the melted butter. Whisk all the ingredients until smooth and then leave to rest in the fridge for 30 minutes. Resting time makes them lighter.

To make the Pancakes:

Get a non-stick pan really hot and swirl around a small amount of melted butter or a small amount of flavourless oil such as vegetable or groundnut. If using butter be careful it doesn’t burn. Add a small ladleful to the pan and swirl it round until it thinly covers the base of the pan. You do not want puddles of unset mixture on top : if you do, there’s too much mixture in the pan. When it’s golden brown underneath either flip it if dare or use a spatula to turn it. Keep them in a warmed oven until ready to assemble the dish.

Melt a knob of butter with a tablespoon of olive oil in a largish heavy-bottomed pan or frying pan over a high heat and when it’s hot, add the mushrooms. Toss them about and keep turning them, ensuring they don’t burn. If the heat is not hot enough they will stew rather than fry, and become rubbery. When they are browning add the chopped ceps and the leeks and fry until the leeks are soft, turning regularly. Add the reserved water from the ceps and allow to cook off. Then stir in the crême fraîche and the squeeze of lemon, season well with salt and pepper and set aside.

Melt the butter in a saucepan and add the flour, stir and cook through for a minute. Gradually add the milk, whisking all the time until all is added then stir over a high heat until it comes to the boil then reduce heat and stir until the consistency of double cream. Add ¾ of the parmesan and truffles, stir until the cheese is melted and then season to taste with salt.

Butter an oven proof dish that can fit 6-8 filled pancakes. Place a one and a half tablespoons of filling in along the middle of each pancake and  roll up and place in the dish. Repeat until all are used up. Pour the sauce over and sprinkle the remaining parmesan and put under a hot grill or in the oven until the top is browned.

Lightly dressed green salad made with butter lettuce, and dressing of ½ tablespoon of white balsamic vinegar, a squeeze of lemon juice, 3 tablespoons of olive oil and salt and pepper, whisked together.
Picpoul de Pinet white wine.