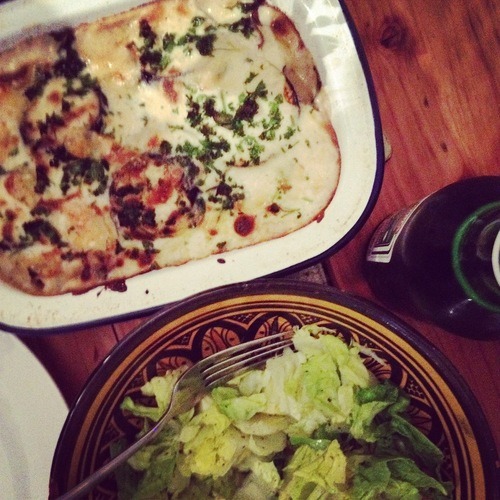 I think I’m stuck in a vegetable and white sauce cooking rut – but am content to be there.

I made the mistake of underseasoning this dish – I wasn’t paying enough attention, clearly – but this was remedied with a good grating of Parmesan when served. It’s a riff off a Claudia Roden recipe that just uses aubergines in her recently published Spanish book – I didn’t have it to hand, but had made her version a while ago and thought it excellent. In fact, there are a number of good recipes in that book.

Brown mushrooms or another variety of dried mushrooms will work as well as girolles.

The friend I was cooking for can’t eat normal wheat, so I used spelt flour to make the white sauce, which works a treat.

Serves 2-3, with salad and a pudding of grilled cinnamon peaches with Greek yogurt

2 aubergines, sliced into 1cm disks and tossed with salt and olive oil

1 cup of dried girolles soaked for 20 mins in hot water, or other mushrooms

Fry or roast the aubergine slices in a little olive oil until they are soft and browned on each side. Make sure the frying pan is very hot if frying.

Set aside.Meanwhile make the white sauce by melting the butter in a small sauce pan, then fry the flour in the butter for a minute. Add the milk very slowly, stirring vigorously with a wooden spoon. Add the bay leaf and nutmeg and keep stirring until it’s the consistency of double cream. Stir in the parmesan until melted and turn off the heat. Season well to taste with salt and pepper.

Then quickly fry garlic in a small knob of butter, then add the spinach and mushrooms and stir around until the spinach is wilted. Season with salt and pepper.

Find a medium-sized oven proof dish. Start with a spoon of white sauce on the bottom of the dish, then a layer of aubergines, then spinach and girolles and a sprinkle of parsley and a grind of salt and pepper. Carry on until all is used up and there’s a enough white sauce left to cover the top. Add more parmesan and parsley to the top. Bake until the top is browned and bubbling. Serve with:

Green salad and some good bread if you have it.