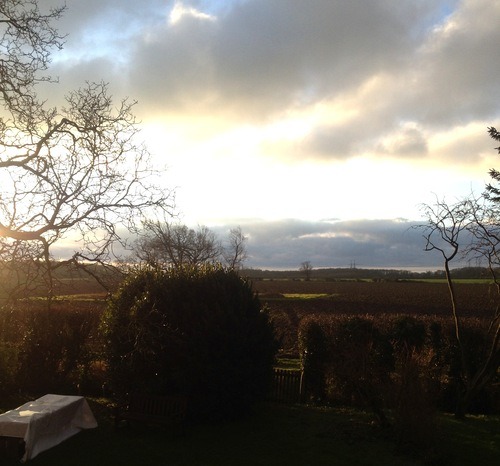 On my first morning back in Suffolk (this morning) I made this for moi-même, having been left to my own devices with the dog for the weekend.

There was an array of possible dairy partners for my egg-to-be: sour cream, crème fraîche, double cream, single cream, ricotta, yogurt. By default I would have made it with yogurt and guided the flavours towards a North African orientation with Harissa and indeed, I took a pot from the fridge and looked at it for c. 5 minutes. However, I’ve been reading a fair bit about English cooking recently and wanted my breakfast to be more along those lines.

The combination of cream and tomatoes is not particularly common now, but in recipes from the middle of the last century, was often found, and has been intriguing me for a while. Cream is far quieter than yogurt or crème fraîche, whose more glamourous sweet-creamy-sour flavours have the appeal of an instant hit. The relatively subtle milky charms of cream melds harmoniously with the egg and touch of butter in this dish which is scented by bay with a pinch of (unsmoked) paprika – evoking (I imagine) the flavours I’ve been reading about.

Ingredients (for one, scale up for more)

5-6 very small tomatoes (cherry or similar), skinned and halved (drop in boiling water for 10-20 seconds and then squeeze out of the skins)

a pinch of paprika (unsmoked)

a small knob of butter

In a small lidded pan or earthenware pot, melt a knob of butter on a gentle heat and toss the tomatoes in it with the bay leaf for a few seconds. Add the cream and cook the tomatoes in it with the lid on until soft with a pinch of paprika. Season to taste with salt. Break in the egg. Add the lid and cook on the hob or in the oven until set. Be careful not to let it get too hard. Sprinkle with parsley. Serve with toast.

Toast and black coffee. This is also eminently suitable for lunch or supper – with a glass of wine.