Earlier this week, I read about Omelette Arnold Bennett in the excellent Four Seasons by Margaret Costas that my mother gave me for Christmas, and in a twist of fate (sort of) I subsequently saw it listed on a menu at Riding House Café in someone’s Instagram feed. It is an omelette with haddock, cream and cheese named after a turn of the (19th) century novellist.

To quote Delia Smith on the matter:

“This is actually a famous classic, created – so the story goes – for the novelist Arnold Bennett, who wrote an entire novel, Imperial Palace, while staying at the Savoy hotel. While his work was in progress, the chefs perfected the omelette to such a degree that our friend demanded that it be made for him wherever he travelled anywhere in the world and hence its name. Meanwhile, the Savoy Grill, proud of their achievement, still serve it every single day, year in, year out. It is a truly wonderful creation, a flat but fluffy open-faced omelette made with smoked finnan haddock. What I have discovered is that, while chefs can instantly call upon a ladle of béchamel or hollandaise (both included in the Savoy recipe), it’s quite a fiddle to make all this at home.”

Warm the flaked haddock through in about half the butter. Beat the eggs lightly with pepper and a little salt – if the haddock is not too salty already. Stir in the haddock and a large tablespoon each of the cheese and the cream. Melt the rest of the butter in a large, heavy pan and cook in the usual way till the omelette is set underneath but still runny on top.

However, I had cooked omelette – Savoyarde (with Gruyère, chives, potato – omitting ham) for lunch a few days previously, and didn’t want another so soon. Also – for breakfast I prefer my eggs un-muddled. Haddock with eggs, was definitely on the menu though, and his was what I came up with.

I used tail end of a meaty side of haddock that had benefitted from a cold oak smoking at the local Pinney’s of Orford. Orford is worth a visit if you like a wind-blasted Suffolk coastal walk with big skies and a pub at the end (pref. the Jolly Sailor).  Other virtues include highly brand-aware yet brilliant Pump Street Bakery for breakfast; the Butley Oysterage Restaurant, an unglamourous stalwart serves generous unreconstructed seafood dishes (cF. Jay Rayer’s rave review); and the 12th century castle. 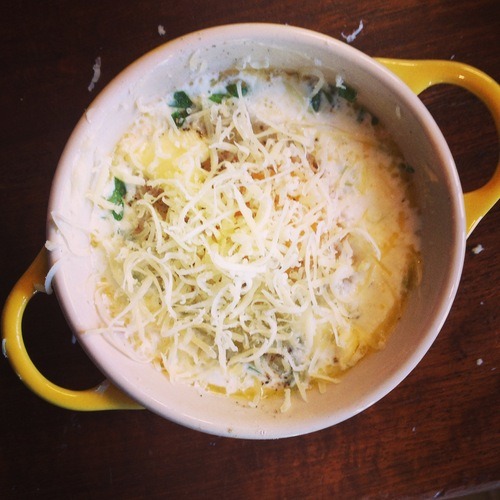 For one, or more if scaled-up

2 ripe cherry tomatoes, cut into at least quarters or smaller

Pre-heat the oven to 180 degrees celsius.

Place the haddock in the milk with the bay leaf, parsley and a pinch of salt and pepper. Simmer for 10 minutes until cooked. Be very careful it does not boil over. Remove the fish and then reduce the milk by half until 2 tablespoons remain. Remove the bay leaf and parsley from the milk.

Flake the fish, removing the skin and place in the bottom of a buttered ramekin dish with the tomato and chopped parsley. Add the reduced milk with the cream or creme fraiche to the ramekin. Crack an egg over and season with salt and pepper. Add a dot of butter to the top and the grated cheese.

Place the ramekin in oven dish filled half way full with hot water.

Place in the oven for 10 minutes or until the egg white has set with the yolk still soft.

Toast made from my Dad’s early attempts at sourdough bread, and black coffee.